The ABCDEs of moles

So this month I thought I’d focus on something I mention almost daily—what to look out for in moles and new or changing skin and nail lesions. Moles are extremely common—if you don’t have any, you have a family member or friend who does. Moles in and of themselves are benign growths composed of an increased number of melanocytes—the cells that contain our pigment (skin color) making compartments.  Moles can be flesh colored, pink, brown, and even blue to almost black—and all of these colors can be normal or abnormal depending on a variety of factors. Most melanoma—one of the most serious forms of skin cancer—develops on its own—not from a pre-existing mole. It is important to know what is normal on your skin in order to recognize things that are new or changing. And with about 1/3 of melanomas arising in pre-existing moles, its vital to know that presence for years or even life-long does not mean a mole is or always will be OK.

Many patients are familiar with the ABCDEs of melanoma. However, there are at least three ABCDE criteria, so I think this is a great time to share those with you. The caveat is that not all melanomas follow ABCDE criteria. Your dermatologist has years of training to help diagnose lesions that often look benign to the naked eye. Three of the four melanomas I’ve diagnosed in the past few weeks were just thought by the patients to be sun damage of no medical concern. Only one was mentioned by the patient to be concerning as it was changing in appearance. I share this as a warning that though ABCDE criteria are helpful, they are not a replacement for the trained eye of your American Board of Dermatology certified dermatologist!

Below are the basic, common ABCDE criteria to consider when looking at a pigmented (colored) skin lesion. If you have a growth meeting one of these criteria, it’s a good idea to have it checked out by a board certified dermatologist (BCD). Meeting ABCDE criteria doesn’t mean a growth is cancerous or even abnormal but it does mean it may have some concerning features that should be examined by a BCD. It may need to be biopsied or monitored, or it may require nothing more than reassurance.

EFG is a separate criterion meant to identify bad actors called nodular melanomas. Though a little redundant (growing = changing), it is still a helpful acryonym. Any skin lesion that is elevated, firm and growing for a month or more needs to be evaluated by your BCD ASAP.

I also add “ugly duckling” to above. Published by Grobb and Bonerandi (3) 20 years ago, I find the ugly duckling sign a useful and easy way for patients to remember that melanomas often stand out. Any skin growth that looks like nothing else on you—especially if it is new—is worth having evaluated by a BCD.

Melanoma in children is overall rare, with incidence in young children approximately 1 in a million and about 10 in 1 million in older teens. However, incidence is increasing, especially in teens. (4) I have diagnosed 2 cases of melanoma in teens in my career thus far and inherited a third teen patient previously diagnosed with melanoma.

Because it is uncommon, melanoma in children can catch both parents and physicians off guard and may be diagnosed at a later stage. Research by UCSF pediatric dermatologists examined cases of childhood melanoma and found that the majority did not meet the traditional ABCDE criteria. (5) Because of this the team of researchers developed ABCDEs specifically for pediatric melanoma. It is recommended that dermatologists use these pediatric criteria in combination with the basic ABCDEs when examining skin lesions in youths in hopes of earlier diagnosis. These criteria could play a crucial role in reducing the devastating outcomes that can result from unrecognized melanoma in children:

A – Amelanotic. This means it is NOT brown/black/blue, but instead flesh-colored or pink to red. In the UCSF study, researchers found that the majority of children 10 and younger and a large proportion of those aged 11-19 had amelanotic melanomas.

Kids commonly get flesh colored, pink, and red bumps including bites, irritated hair follicles, and bumps from injuries. One could go bonkers worrying about all of these being more than they are. As noted above under the basic criteria, a useful concept suggested in several studies proposes the level of concern be determined by if it is “EFG”: elevated, firm, AND growing consistently for 1 month or more.

B –Bleeding or Bump. As opposed to irregular borders often seen in adult melanomas, childhood melanomas have been identified as more commonly being raised (“bumps”) and bleeding.

Rabbit trail: This bring to light the importance of never allowing someone to cut a skin growth off without it being sent for microscopic analysis by a pathologist—ideally one who specializes in diagnosis of skin under the microscope (a dermatopathologist). There are few exceptions to this rule such as skin tags as those have been confirmed in clinical research to be appropriately diagnosed by dermatologists on clinical grounds alone (i.e., looking at them), but I advise caution in this area.

D – De novo. This means it develops out of nowhere; it is new. D also stands for Diameter of any size.

E – Evolution. This is the only pediatric criterion that is the same as the basic. The landmark UCSF study found that nearly ALL of the cases of melanoma in children had changed over time. This was confirmed in a more recent Mayo Clinic study of melanoma in children. (6) The tough thing here is that it is extremely common—even normal—for moles to change in children. I commonly tell parents that moles typically grow with their children and I have seen this in my own children’s moles as well. Moles that grow out of proportion to a child’s growth or change in other ways may be of more concern and warrant a BCD’s evaluation.

Interestingly, primary melanoma can occur anywhere there are melanocytes (pigment cells): namely skin (including mucosal areas such as mouth and genitals) and nails, but rarely it can occur primarily in the eyes, ears, and central nervous system. A lot of people are surprised that melanoma can occur under/in nails. These, like pediatric melanoma, are plagued by late diagnosis and are sadly metastatic at time of diagnosis in too many cases. The ABCDE’s of nail melanoma (7) can help identify risk factors and concerning lesions, but it’s good to know that benign growths of the nail are much more common. In my opinion, some of the criteria aren’t very helpful—for example, age 20-90 doesn’t narrow things down much—however, overall the list is a good start and hopefully further research can help make it more precise.

C – Change (Here is the Evolution again, just under another name.)

D – Digit involved. Thumb/big toe are most common followed by index finger. Also, only one fingernail or toenail is involved.

E – Extension of pigment to the skin around the nail (cuticle, sides of nail) or extension to the end of the nail.

So those are the three sets of ABCDEs! In no way am I suggesting that you memorize all of these criteria; this is meant to serve as a reference. And when you see me or whoever your BCD is, you’ll have a better idea of some of the things we’re looking for when examining your skin and nails.

The one criterion I DO want you to remember is Evolution because it is the one criterion that is nearly always present. Because melanoma is cancer, it grows and changes and that change is often in appearance. Though most melanomas have no symptoms (i.e., most don’t hurt or itch, etc.), some do so don’t ignore new itch or other changes in sensation of skin growths. Just like changes in appearance, change in feel/sensation should be relayed to your BCD because symptoms may tip the scale towards biopsy or serial monitoring of questionable growths.

I hope this information is helpful to you! If you have any lesions of concern or would like an overall skin check, please give our office a call to schedule. One of the great things about our model of care is that we almost always can get you in within a week of your call.

Thanks for reading and have a wonderful month! Check out our Sept specials below.

Save $100 per session on laser vein leg treatments!*

Get your legs ready for next spring and summer NOW! 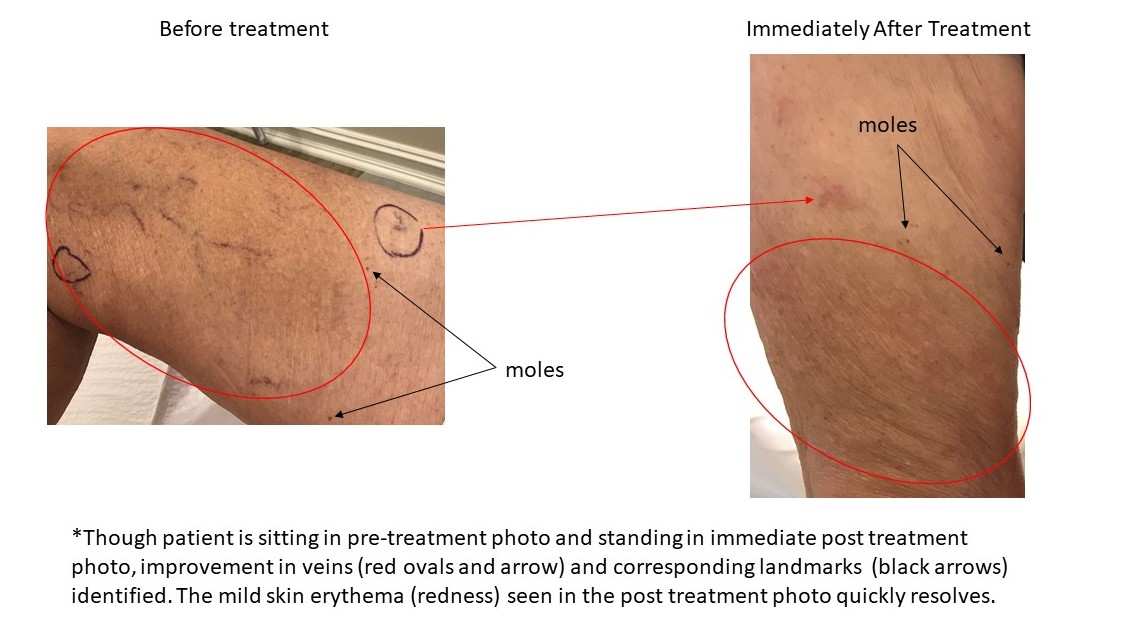 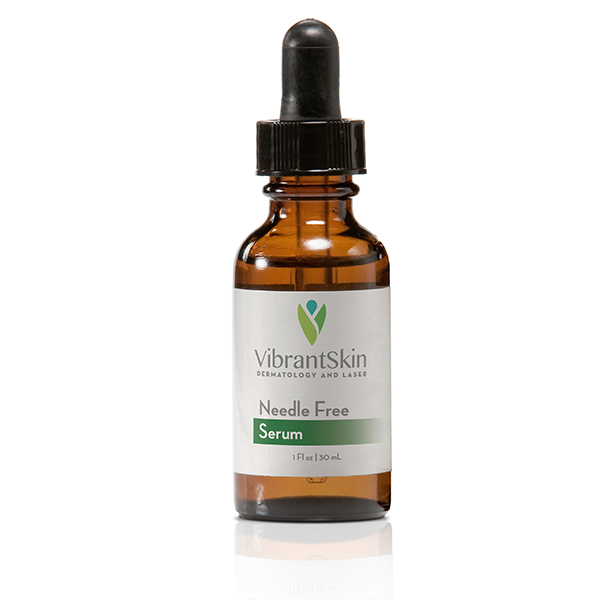 Craving filler without the needle?

Our Needle Free Serum activates skin fibroblasts (cells) to boost collagen and elastin formation thereby reducing the appearance of wrinkles, increasing skin firmness and clarity, and reducing skin laxity within weeks of regular use. Delivering hyaluronic acid–the most common ingredient in cosmetic fillers–along with niacinamide (B3) and an amino acid and copper complex, our serum, has been shown to provide visible results in as short as two weeks and lasting results with consistent use.